Do not believe a thing because many people speak of it

November 15, 2018/humblebub
1965 was a big year. I turned legal for consumption of alcohol and was required by law to register with the US Selective Service. Most of my friends were of similar age and the war in Vietnam was a looming Spector of worry. We were all proud of being Americans and most of us were opposed to the war – not because of fear but because of the fundamental wrongness of the conflict. It was a time of conflict. By registering with the Selective Service our names went into the draft lottery and we became fresh meat to fuel the slaughter happening in South East Asia.

Most nights we would gather, drink cheap beer and prepare for the rest the night adventure. One of the guys who was an infrequent participant in our group was Greg  Burdo. I remember him as a school mate, a wirey energetic guy with a great laugh and attitude. At some point Greg’s number was drawn, he was drafted and disappeared from our circle and joined many other young men fighting in SE Asia.

He returned forever changed. When Greg returned he moved to the woods. A basic shelter of plastic sheets, scrap plywood and canvas and for over 40 years that is where he has remained. Urban development has occurred around him but his little spot remains.

He was befriended by a local blogger and newspaper reporter who has published various pieces about Greg. I have followed the articles. Greg has had some help over the years, but not much. You can tell the reporter likes and respects the man.

If you have an interest go to poststar.com and search for ‘Greg Burdo’. The articles are all there. As I listen to the wind howl I can’t help but think of Greg and his home. But for some luck my name could have been drawn in the lottery and my life could have taken a different path.
Count your blessings. 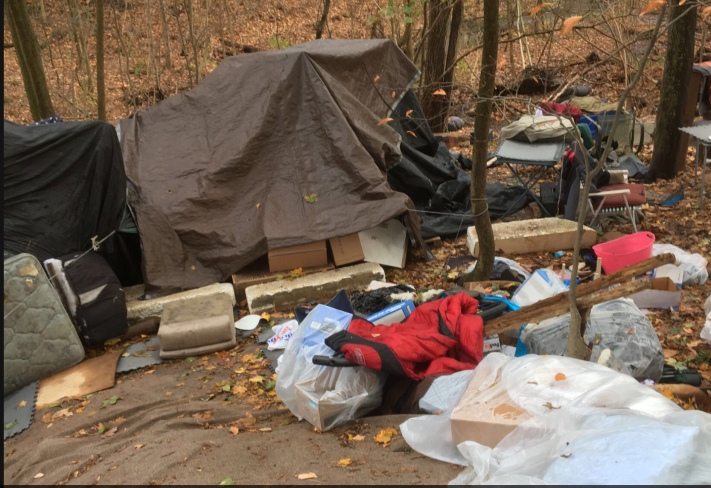